Traveling as a Culture of Remembrance: Traces of National Socialism in West Germany, 1945-1960 *

For a long time, too long perhaps, the central question in Vergangenheitsbewältigung studies--that is, studies exploring the ways in which Germans have attempted since 1945 to master their Nazi past--has been whether Germans came to terms with the past or not. This is an important question, underlined by its moral urgency. But, as a historical question, it has severe limitations. Recently, it has slowly been replaced by more comprehensive questions: what did Germans remember of the Nazi past, how was it remembered and who remembered what? Building on these new research questions, this essay is conceived as a critical reflection on Vergangenheitsbewältigung studies. My focus is on postwar West German society between 1945 and 1960. It is an attempt to explore how the topic of mastering the past can further an understanding of postwar German society and culture. The first part of the essay discusses critically problems of method in old and new interpretations. In the second part, I use the social and symbolic practice of tourism as a methodological vehicle to illuminate postwar values and beliefs concerning National Socialism. My aim is to be suggestive, not comprehensive. I do not state this to preempt criticism. Rather, I view this essay, as well as the test case of tourism, as an attempt to think through a useful way in which to conceive of mastering Germany's past. For there is no one "correct" way of conceiving of this topic. Some trips, to use [End Page 92] a metaphor from the world of traveling, actually have a final stop. Historical understanding, a trip of unexpected consequences if ever I knew one, is not one of them.

How did West Germans remember the Nazi past in the period after 1945? The common view, shared by scholars, journalists and laypersons, has been for a long time that, as one historian argued, "National Socialism was treated for a whole generation with collective silence and wide-spread amnesia." 1 This interpretation, full of moral concern, was first formulated in Germany in the 1960s, when the sons and daughters rebelled against the war generation of their parents. The argument, as well as the atmosphere of the period, has been successfully captured by novels from and about the period. Thus, Bernhard Schlink describes in The Reader the sentiments of the hero, Michael Berg, who attends a war-crimes trial during his law studies:

Exploring the past! We students in the seminar considered ourselves radical explorers. We tore open the windows and let in the air, the wind that finally whirled away the dust that society had permitted to settle over the horrors of the past.... The [war and reconstruction] generation ... was in the dock." 2

A foundational text of this interpretation and its vocabulary was the 1967 study by Alexander and Margarete Mitscherlich, The Inability to Mourn, which analyzed postwar West German society in Freudian terms. While Germans' moral duty after the war was "working through" their crimes and guilt, they chose instead to repress the traumatic Nazi past and to channel their energy to the material construction of West Germany. 3 In different renditions and various degrees of sophistication this view dominated the historiography: the argument was that most Germans repressed the Nazi past; the mode of proceeding was to look for traces of memory in the records of cultural artifacts, war-crimes trials and political acts (such as the restitution for Holocaust survivors); the basic assumption was that a trauma like the Third Reich must and should [End Page 93] be overcome for Germany to lead a normal life. The body of work produced by this approach has significantly illuminated how Germans attempted to master their past and how most of them refused to own to it.

In principle, the argument that (some) Germans repressed (some aspects) of the Nazi years is unassailable. But the question is what are the... 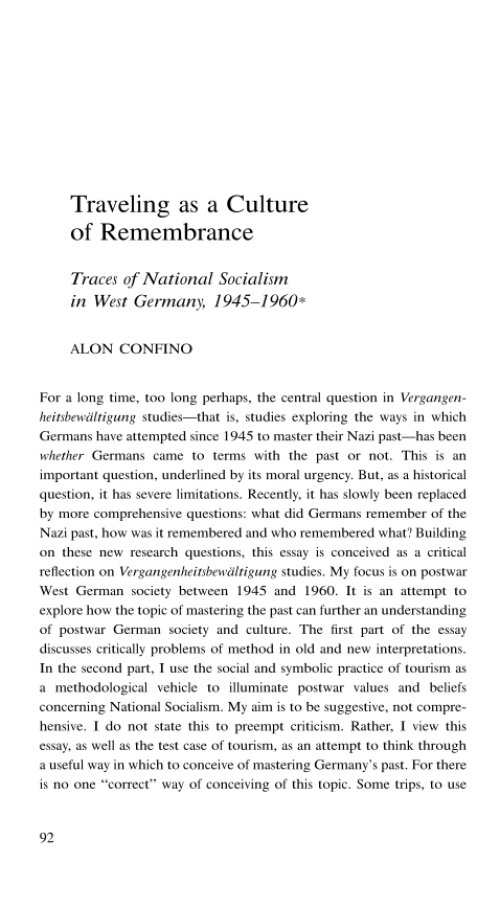